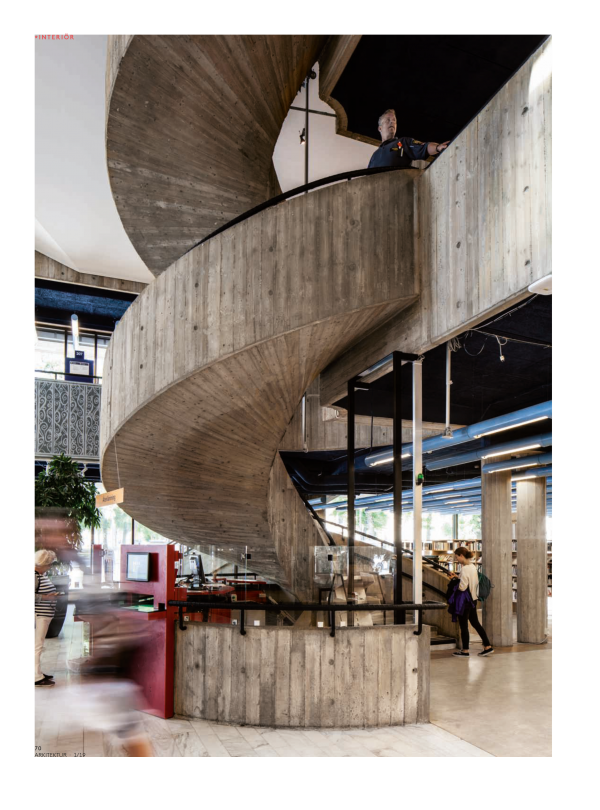 It is easy to be filled with admiration for the Italian Cultural Institute in Gärdet, Stockholm. It was completed in 1958, and after 60 years, it still reminds us that architecture is an art through its specificity.

An atmosphere still remains — in the ultramodern features — of the public architecture that was built at that time, and which formed the backbone of the Swedish welfare state.

Gio Ponti’s fashionable, white variation of modernism lingers in the walls. A house fully designed right down to the tiniest detail. Here we can see the rational spirit of progress and machinery of the time. The interior design includes items such as armchairs in imitation leather, ultra-light Superleggera chairs, and railings inspired by aeroplane wings.

As with much of the other public architecture of that time, the house clearly stands for a tradition of craftmanship. It does not take long when visiting the institute to realise that there are very few right angles, that the pillars in the lobby are all different, that the windows in the corridors are not rectangular, and that the walls and ceilings are sloped and curved. It is a complicated construction, a tribute to the unique. Gio Ponti himself spoke tirelessly about experimental art: buildings and designs as signed originals.

It is difficult to avoid the classical ideals that Ponti was drawn to. The perfected form was that which, through being specific, would transform a building into an experience.

Ever since the classical period, architecture has been associated with unique design. The distance between the columns in classical temples was, for example, often less in the middle, increasing out to the sides. It was a question of individualisation to please the eye, as with the finely chiselled craftmanship seen on each capital.

When Ponti chose concrete and steel in his construction method, it was largely a modernisation of stonemasonry. For him, construction and expression were one and the same.

Nevertheless, the industrialisation that Ponti and his contemporaries paid homage to, in the same breath as they declared it to be the future, had a bitter aftertaste. Buildings of the same kind as the Italian Cultural Institute and the many other public institutions that were constructed during the era of the welfare state are hard to realise today. The custom-made, well-designed solutions of that time are at odds with today’s construction industry, which some time ago moved from craftmanship to assembly technologies.

As modernism broadened out and rational production processes became popular in the 1960s and 1970s, many areas of architecture changed fundamentally, not least in Sweden.

An order formed in which construction and architectural expression distinctly separated from each other. Architecture became a surface-layer art, both in terms of façades and interiors. How things were built or constructed was less important than the few millimetres visible to the outside world. The most cost-effective prefabricated framework was covered with panels and plaster.

Gio Ponti’s approach to the interior as a consummation of a building’s construction and form is now long gone. That which is specially designed is limited to isolated details, such as fittings, for example. Uniqueness today is rarely about creating an original form, but comes instead from an extensive collage technique, skilfully combining various acquisitions from catalogues and websites.

The art of interior design, which was vitally important to Ponti, and which he saw as a building’s completion, has been transformed today into a treasure hunt in an endless sea where items from all global manufacturers can be found floating freely. To discover a product or a material that has not yet become common knowledge is a way to create legitimacy. It is this that signifies being first today — setting the agenda.

It is against this backdrop that the newly awakened interest for brutalist architecture should be understood, which Tove Falk Olsson and Martin Rörby have admirably recognised in the books Sthlm Brutal (Stockholm Brutalism) and most recently Sverige Brutal (Swedish Brutalism; both published by Bokförlaget Max Ström). Fifty years had to pass before we could make a realistic assessment of the merits of this controversial style.

Brutalism offers a step back, a link between construction and expression, without having to go all the way back to Ponti and his contemporaries with their basis in designs produced with craftsmanship. Brutalism encompassed a strong belief in construction as part of expression.

Something that brutalism was not afraid to do was to let things remain visibly unpolished and raw as a rational consequence. Materials were not used as surfaces to conceal. All things were simultaneously part of an installation. It might today be considered dangerous to expose structures and construction systems that were not intended to be visible. There is, however, an economic harshness that should not be forgotten in this context: the unnecessary can be stripped away, presenting an opportunity to free industrialised construction from its prescribed application of various surface layers. When it comes to productions in which economic resources are scarce, not least in housing, this is key to increasing the quality of the rooms. Arrhov Frick’s HG 7, Andreas Martin-Löf’s Snabba hus (Quick Houses) and HauschildSiegel’s many projects in Malmö are examples where an industrialised expression has been applied. Most shops and restaurants, which tend to suffer from theatricality and conceptual tricks, might thus also attain designs that are more sound.

The advantage of industrialised construction is, as the French architects Lacaton & Vassal have shown, that correct utilisation can result in increased area and more spacious apartments, thanks to efficient production. It can also create a different focus for rooms: better surface layers and materials only where needed, and better space and light conditions — more fundamental architectonic elements.

Of course, this can easily swing in the opposite direction: rooms simply become austere and harsh, such as suburban concrete, where scales have turned out wrong, and rooms often became jammed together, and, as a result, humanity became more distant.

The most prominent public examples from the years of brutalism — such as Filmhuset in Gärdet, designed by Peter Celsing; and the Norrköping City Library, designed by Sten Samuelson; both of which are copiously presented in the book Sverige Brutal — are projects worth revisiting for close study. The former has concrete design elements inspired by film reels, and interior design that makes an important contribution where the raw construction materials are found lacking. Its lobby sports a glossy ceiling, with a red carpet on the floor following a ceremonial ramp up to the entrance. The cinema is perhaps Sweden’s most impressive and pleasant place to present films. The soft leather-upholstered armchairs represent that extra touch in exactly the right place.

Norrköping City Library is even more thought-provoking. It is not possible to separate the constructional exterior of the building from its interior. Concrete defines the rooms, although it is more a case of a single room. It is easy to see the library as one fully open space with floors joined by a lobby where stairs explore upwards. On each level, with durable linoleum mats, there are colour-coded bookshelves that are broken up by seating areas. Fluorescent lamp fittings cover the ceiling like monotonous stripes. Most of what is unnecessary seems gone. At the same time, the library space gives a controlled and orderly impression. It is a room that does what it should: it works. A functional space. The calm and sober impression has a lot to do with how it is in contact with an external space — the town outside. Openness is achieved through well-chosen outward views.

One of the interesting things about the library is how its operating elements do not differ very much from many leading cultural institutions built internationally. It could be compared to Schaulager in Basel, designed by Herzog & de Meuron, which has, among other things, a lobby with double ceiling height, a concrete structure and fluorescent lamps as ceiling decorations.

What the library in Norrköping tells us is how an architect can prioritise exactly the right things to make a difference, both with the interior and the exterior. We should thus remain sensitive to what brutalism can teach us. 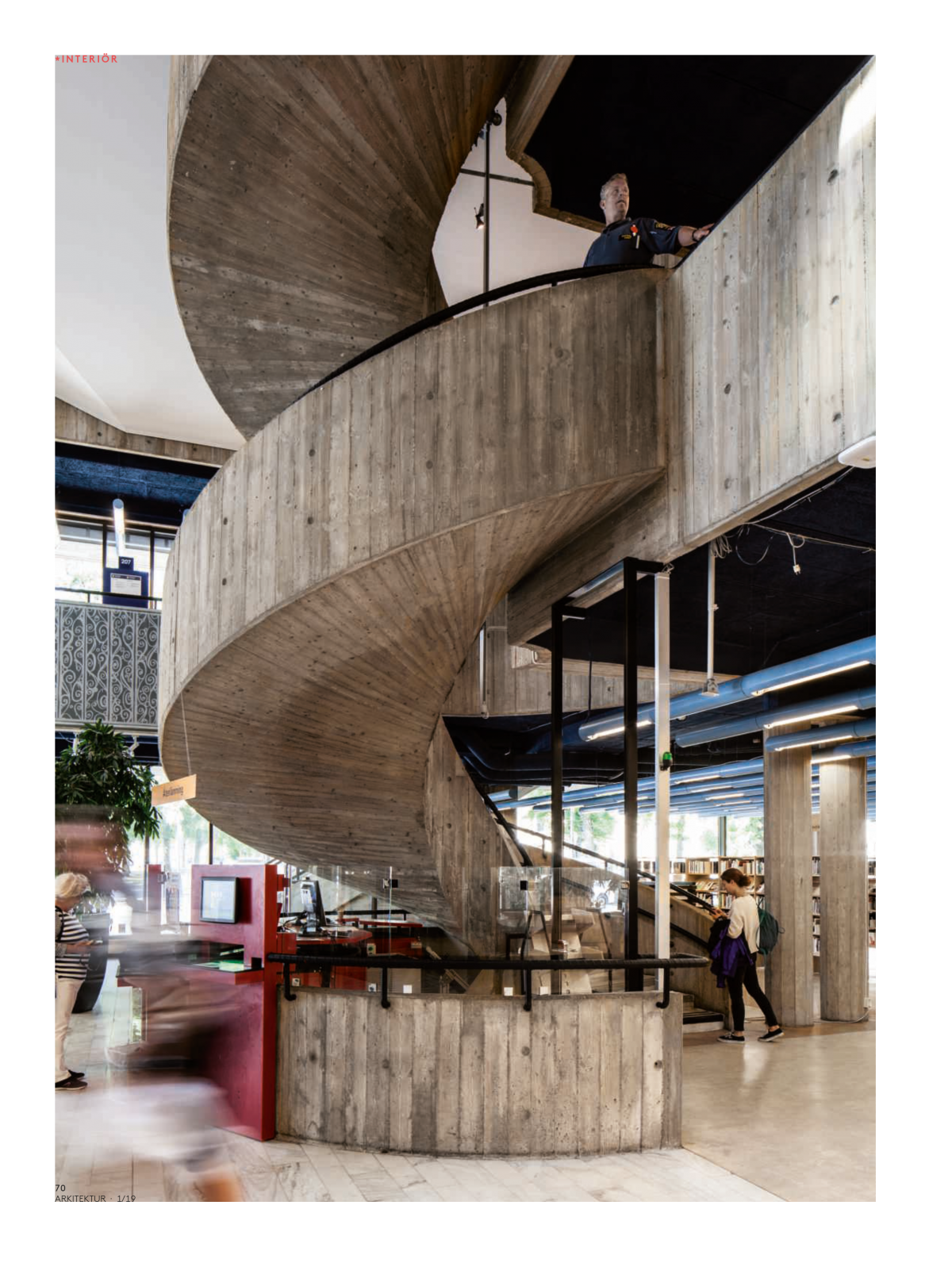 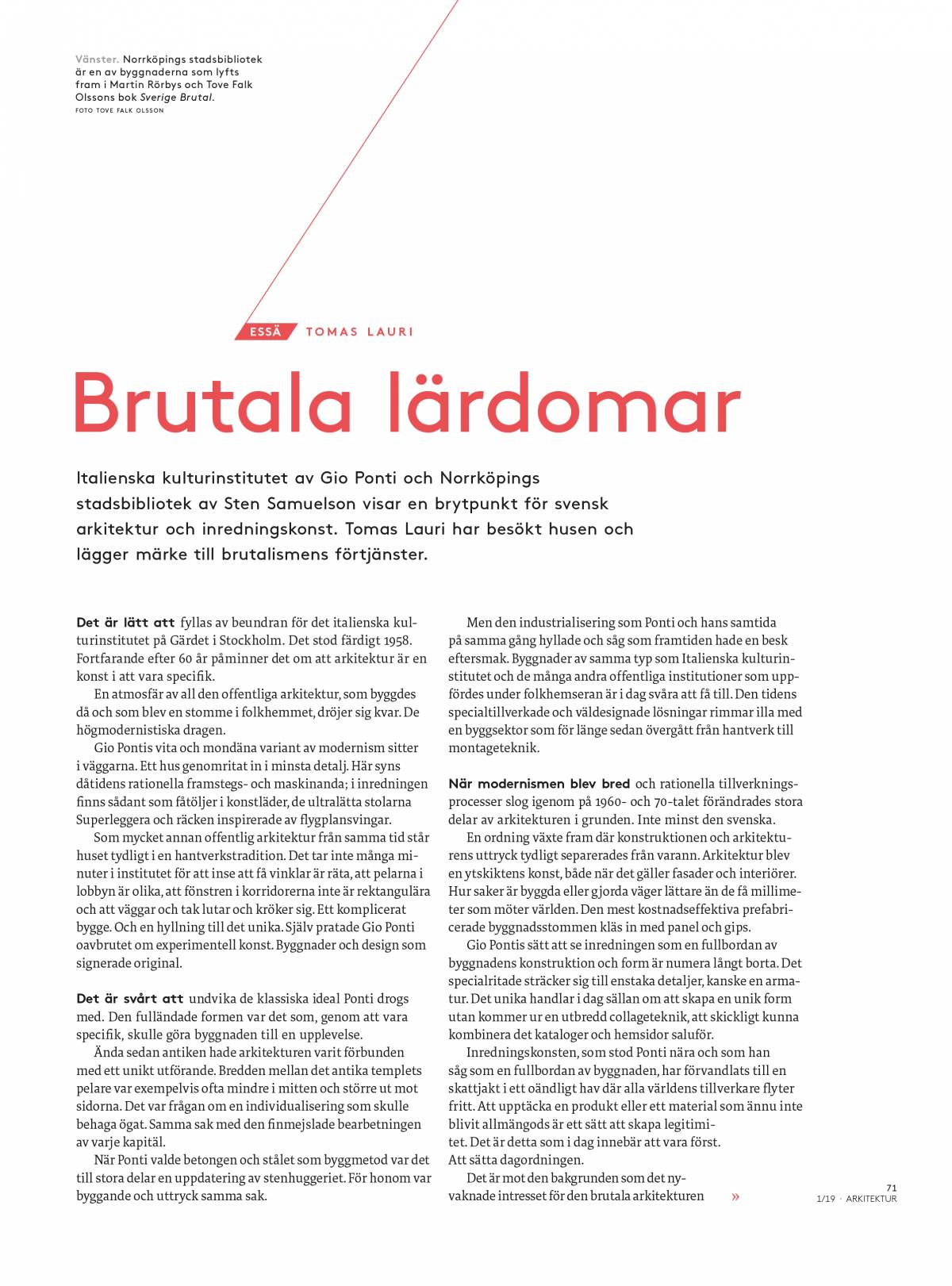 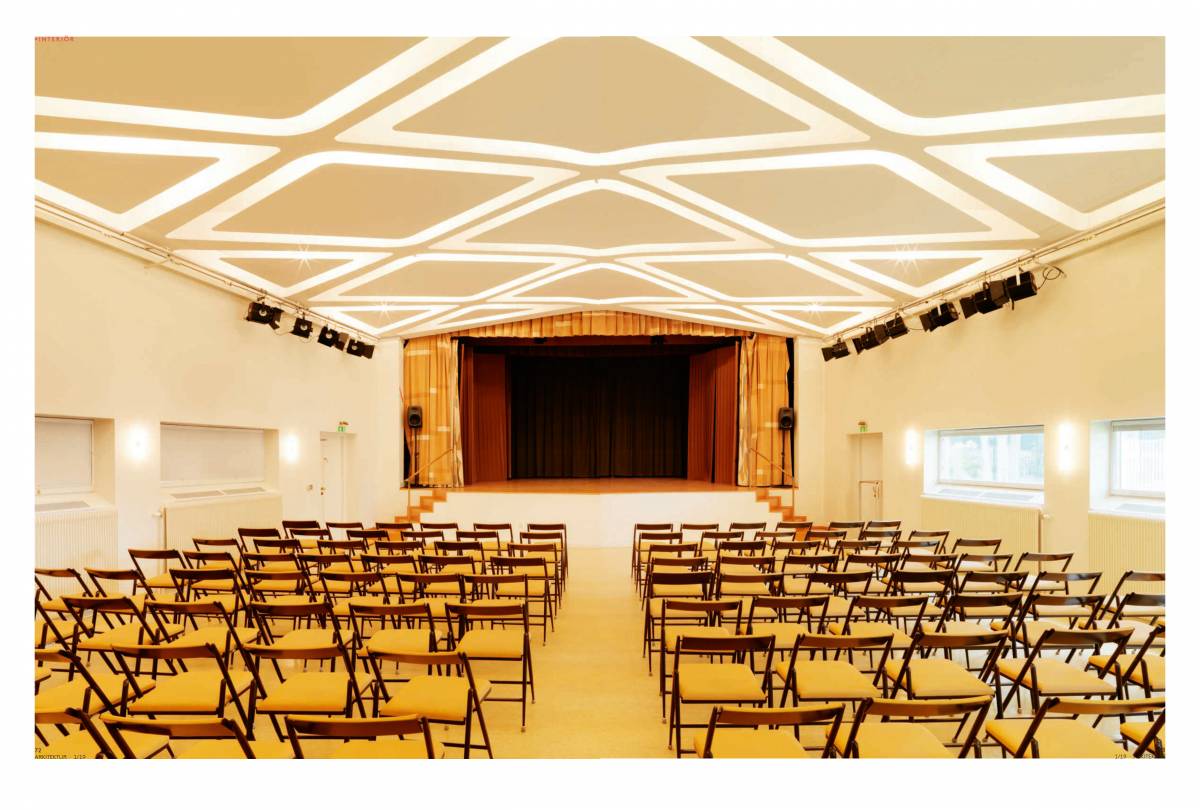 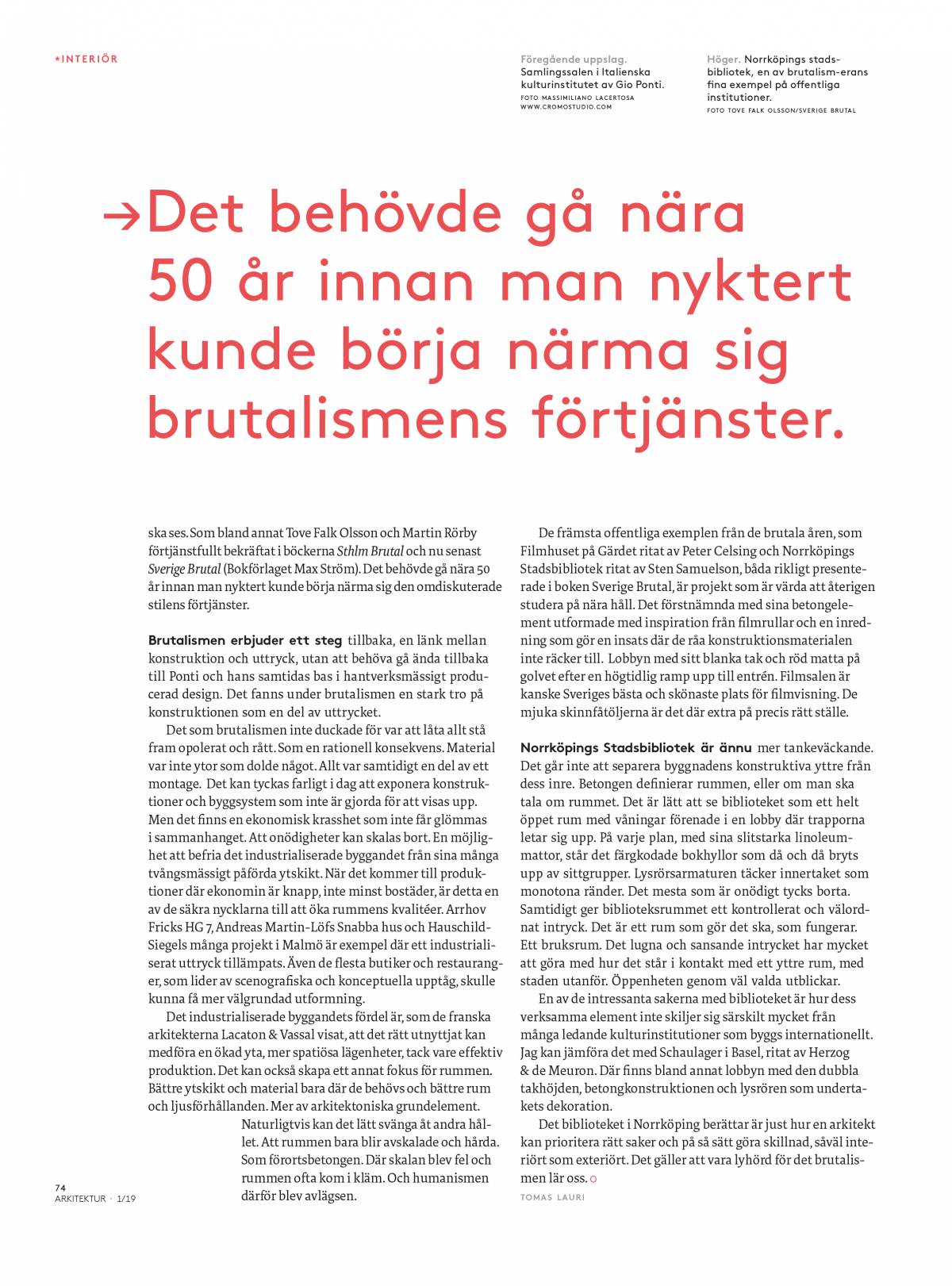 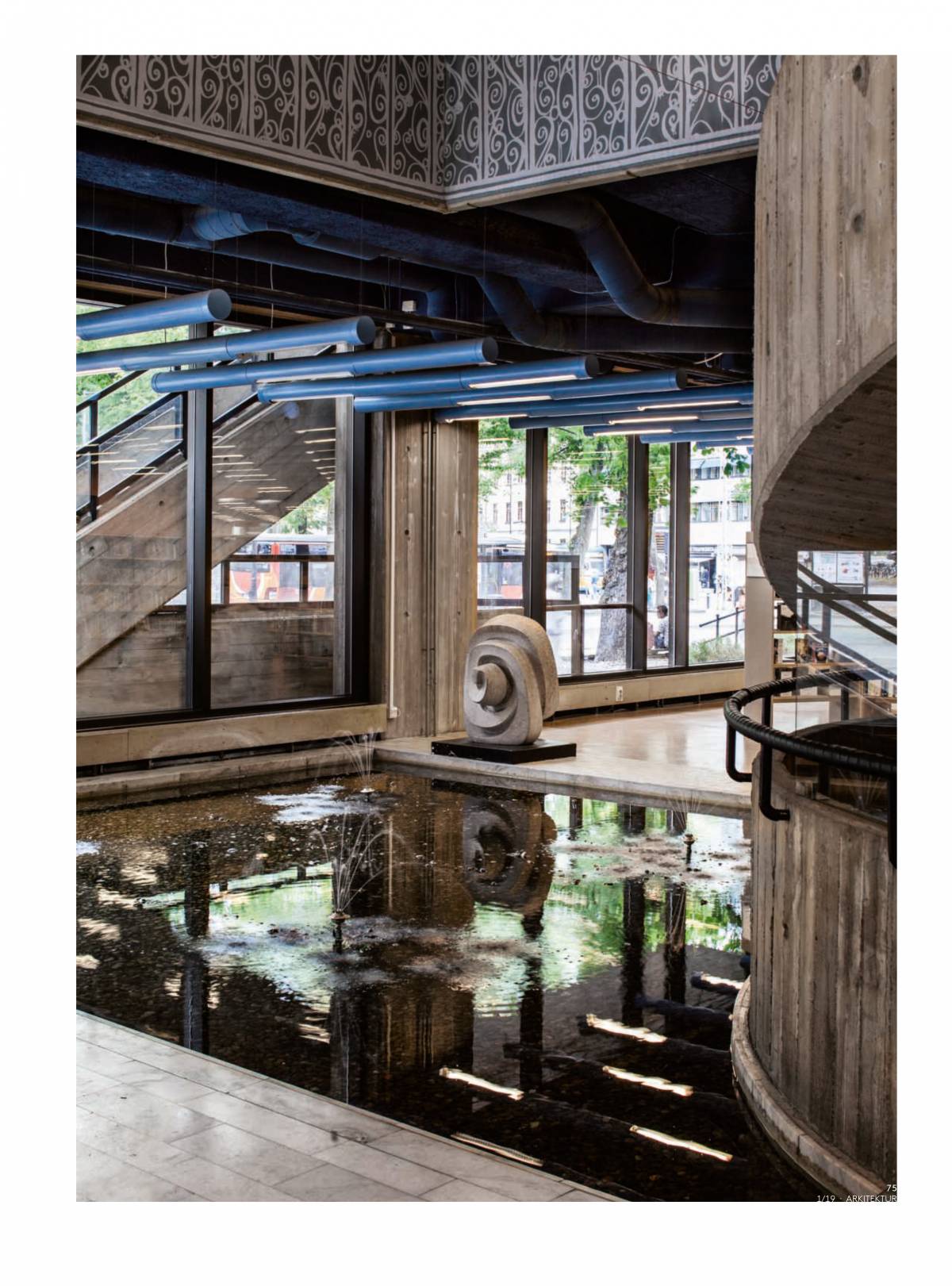