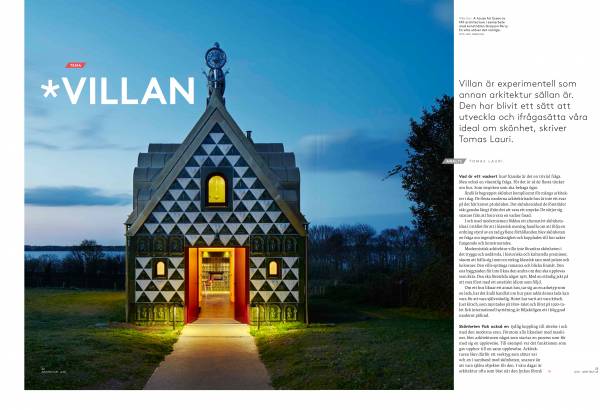 What makes a beautiful house? Perhaps this is a trivial question. Perhaps also an essential one. That is, after all, how most people think about houses — like ornaments, something to please the eye.

Yet the concept of beauty is complicated for many architects ­today. Most modern architect-designed houses do not represent a response to this requirement of beauty. The ideal of beauty that they stand for is quite far off from being ornamental. Instead, they refuse to simply become a beautiful façade.

Modernism gave birth to an alternative­ ideal of beauty. Instead of being about following an order of illustrious conditions in a classical sense, beauty became a matter of engineering linked to the function of things and their construction.

Modernist architecture did not try to anchor beauty within the safe and inherited, in historical and cultural assumptions, such as staying within a strict classical framework of pillars and columns. It strove to smash down boundaries and look to the future. One building should not resemble another if it is to be perceived as genuine. It should represent something new, thus embodying the unceasing quest to be the first to an aesthetic idiom.

If one house should resemble another, if it assumes an archetype such as a barn, it still becomes about how odd that barn should be to become distinct. The danger, however, is to veer toward kitsch. It is this very concept of kitsch, which was coined in the 19th century and only gained international circulation in the 1920s­, that is a largely modern invention.

Beauty also found a clear connection with movement in the modern era. In addition to many analogies with machines, architecture became the initiation of a process, bringing with it an experience. For example, it was function that gave rise to a true experience. Architecture therefore became a tool to place everyone within the context of beauty, rather than being the object of beauty itself. These days, architecture is often at its best when it manages to inspire us to see and feel our surroundings, when it makes a place seem present to us in a way it didn’t quite before.

One of the things that author and philosopher Alain de Bot­ton returns to in his book The Architecture of Happiness (2006) is that architecture must address beauty in a way that it has not done in quite some time. De Botton, who is convinced of the excellence of modern architecture, does not therefore see this as turning back the clock to an ideal of beauty from before 1917. For him, the key is, with reference to the English art critic John Ruskin (1819–1900), that architecture must speak to its audience about beauty.

Even if we admit that architecture can speak, this does not entail that some styles take precedence over, or are fundamentally better than, others. There is no difference between the style of modern architecture and the style of an older architecture. Architecture always reveals something, whether it means to or not, about a certain beauty.

Another thing that has caused most discussions about beauty to flounder is our habit of thinking of beauty as something completely subjective, entirely in the eye of the beholder. Alain de Botton puts forward the argument that there are some basic general human needs regarding beauty: an appealing mix of order and complexity, as in Andrea Palladio’s Villa Rotunda (1580); the ability to ba­lance contrasts, such as Herzog & de Meuron’s Stone House in Tavole, Liguria (1988); or a deep understanding of a culture, like Tezuka Architects’ Villa Jyubako (2004), are three characteristics that he traces in most of the best architecture.

Since the turn of the millennium, the new scientific branch of neuroaesthetics has emerged: an attempt to scientifically approach the laws and regulations that govern (or do not govern) our perception of beauty. It is interdisciplinary research in which biologists and psychologists, among others, work with aesthetic scientists to try to map humankind. In many ways, they pinpoint the importance of aesthetics for the survival of our ­species, but also the inherited ability of humankind to determine what beauty is. Among other things, they have mapped the ability of artists to reinforce and simplify the main features of different motifs and exploit elements such as contrast and symmetry.

One of the claims made is that the beauty of our environment ­is essential for the survival and health of our species (and all other species). This appreciation of beauty is part of our cerebral hardware, not something that only exists in the eye of the beholder.

Naturally, this research has attracted the attention of architectural theorists. It has also notably pleased those who gleefully accuse modern architecture of going against the taste of the people, lacking historical roots and suffering from an absence of aesthetic order.

The evidence from neuroaesthetics that patterns, textures and articu­lation are important aspects of humans and animals creating their surroundings has, not unexpectedly, been used as evidence of the importance of beauty.

As such, the postmodern bible Learning from Las Vegas (1972), with its decorated sheds, is often mentioned in the same breath as the demand for a new ideal of­ beauty. One of the ideas put forward is that science does not recognise such things as function or tectonics as prerequisites for beauty. So why do architects continue to do so?

In actuality, however, it is difficult to use neuroaesthetics as a tool in the debate on beauty. It does not take a clear side for one particular style, being more about how an individual is and how they make use of beauty.

One of Alain de Botton’s main arguments is that beauty is fundamentally a changeable thing. It is connected with human survival and is always based on a lack an individual­ perceives in their world and the promise of improvement it brings.

It is possible, as he does, to exemplify this on a private level with the terraced housing Le Corbusier designed for workers in Pessac, France in 1925. They were austere and plain. Pretty soon, however, they were adorned with shutters, and ornamental gnomes appeared in the gardens. Those who moved in had a completely different need for aesthetics than that of visionary Le Corbusier.

Architecture can also be seen as a genre that ­evolves. In some sense, architectural advances have always been associated with ideals of beauty and aesthetics, whether those ideals explore analogies of machines or ceremonious ornamentation. Architectural history pushes forward thanks to aesthetic shifts and changes in ideals.

Styles, or variations on styles, come and go. Just as postmodernism was a change within modernism, the classical differences have been innumerable: from the Renaissance came the Baroque, etc.

The question, of course, is what drives the evolution of aesthetics and architecture today?

It seems clear that this evolution is gaining momentum by taking a critical look at reality.

Evolution of this form is currently taking place in Swiss villa architecture, which Frida Grahn writes about in this issue. In a place where the ideal has long been newly built modernist concrete villas, embracing reuse has become a way forward, leading to new and important aesthetic preferences.

Swedish villas represent the most resilient­ genre of Swedish architecture in recent years, not least in view of the aesthetic development of architecture.

Evolution is often about reacting to prevailing aesthetic ideals. When Anders Johansson and Anja Thedenius at Södersvik Arkitekturproduktion talk about their house, they take an anti-aesthetic approach. However, even an anti-aesthetic can itself become an aesthetic. That the high, open church interior in which their holiday home has found itself, or the coarse pine furniture they produce, would not represent an aesthetic feels a little far-fetched.

For many architects operating in a narrow modernist style (which most are) it has become obvious to look ahead by establishing a kind of modernist classicism. Modernist ideals have become classical in the same way that ancient ideals first did. For architects, it’s all about continuing on the same path of style as before.

To see modern ideals as an effective way of telling new stories about reality. To refine and enhance, to tug at and tear up the fundamentals of modernism. In this sense, Ola Broms Wessel’s own villa in prefabricated concrete is an obvious example.

So too is the pavilion in glass and concrete that Andreas Forsberg designed on the shore of Lake Mälaren.

Alain de Botton is one of many who note that ‘Life in much of the developed world has become rule-bound and materially abundant, punctilious and routine’. As such our ‘longings now run in another direction: towards the natural and unfussy, the rough and authentic — longings that bourgeois households may rely on unrendered walls and breeze blocks to help them to assuage.’

There has never been anything wrong with the possibilities that concrete offers; its potential to solve a thorny situation is considerable. Sometimes it is simply the case that concrete is the most creative answer to establishing beauty in architectural projects today, not to mention the answer to what a person might desire or lack in life.

What makes Alain de Botton interesting is that he has taken action, taken the step from writing about modernist beauty to becoming a developer himself. His production company Living Architecture has built different forms of Case Study Houses for our time, as well as creating an index of what beauty in everyday architecture might be. De Botton has gone to these lengths so that people might experience modern architecture and rid themselves of prejudices surrounding it.

There have been seven houses to date. Each is unique, and they have been erected in different places in the English countryside. All are by some of the most renowned architects of our time. Two of the latest, one by FAT Architecture in Essex and the other by Peter Zumthor in Devon, illustrate the breadth of the project. FAT’s house, which has been made in collaboration with the artist Grayson Perry, almost drowns in its own ornamentation and decoration, while Zumthor wants to make us feel the depth of history with a house in the spirit of Mies van der Rohe: large glass surfaces, few materials and clean expressions throughout.

The important connections here are those to Essex and Devon. The intention and goal lie beyond the obvious differences of the projects, beyond the style, and are instead tied to the places where the houses are situated. In both cases, the houses produce experiences that are supposed to make life a little better, to augment the location: to add something that also changes the view of the place itself to some extent, and to allow access to that which has been hidden. It is not a case of direct presence, as Philip Ursprung discussed in the previous issue of Arkitektur, but rather it is an enhanced presence, an increased consciousness, that they are trying to achieve.

The houses are successful to different degrees: Zumthor’s feels convincingly classic with its openness to the landscape, while FAT’s wallows in notions of memories of historic houses in the area. That Zumthor succeeds is certain; whether or not FAT manages to reach the same heights can be discussed.

It is easy to realise, however, that style is simply a language and that what matters is what different houses express or the experiences they make possible. That is where beauty begins.

The essay was published in Arkitektur as an introduction to nr 5/2019. 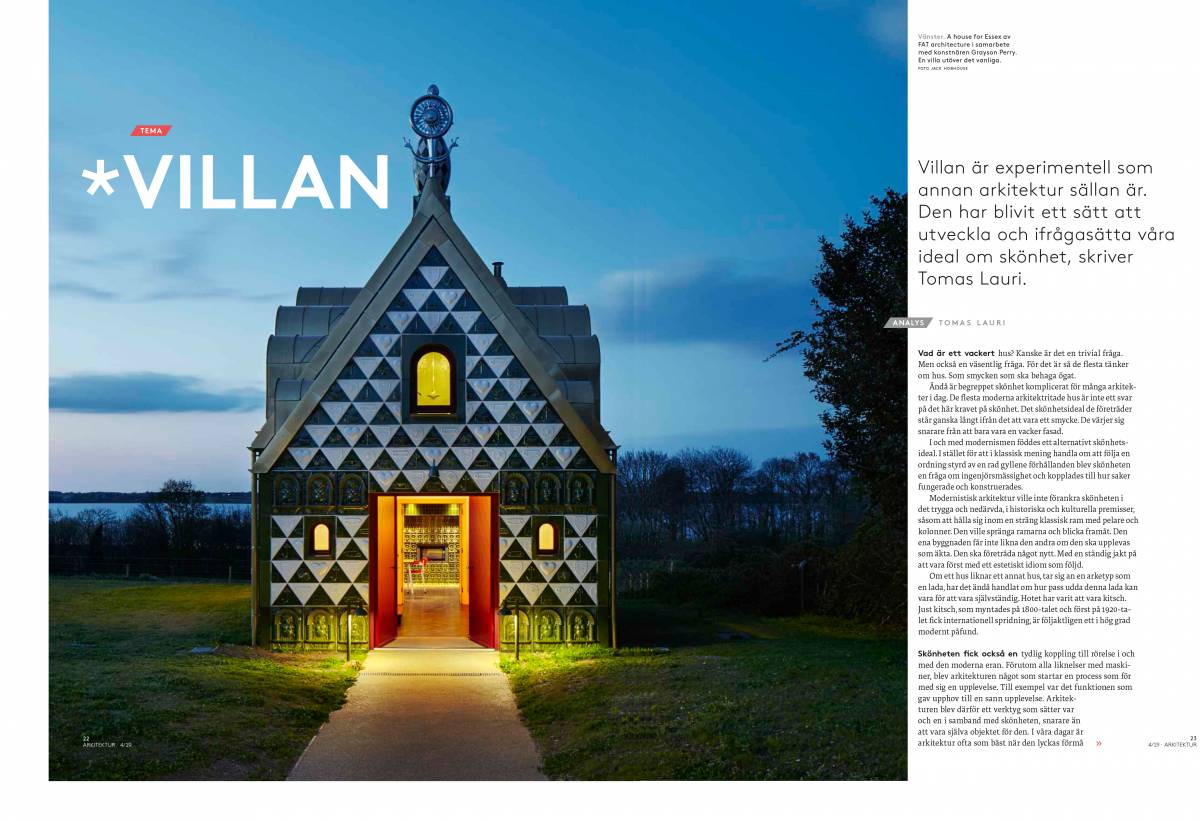 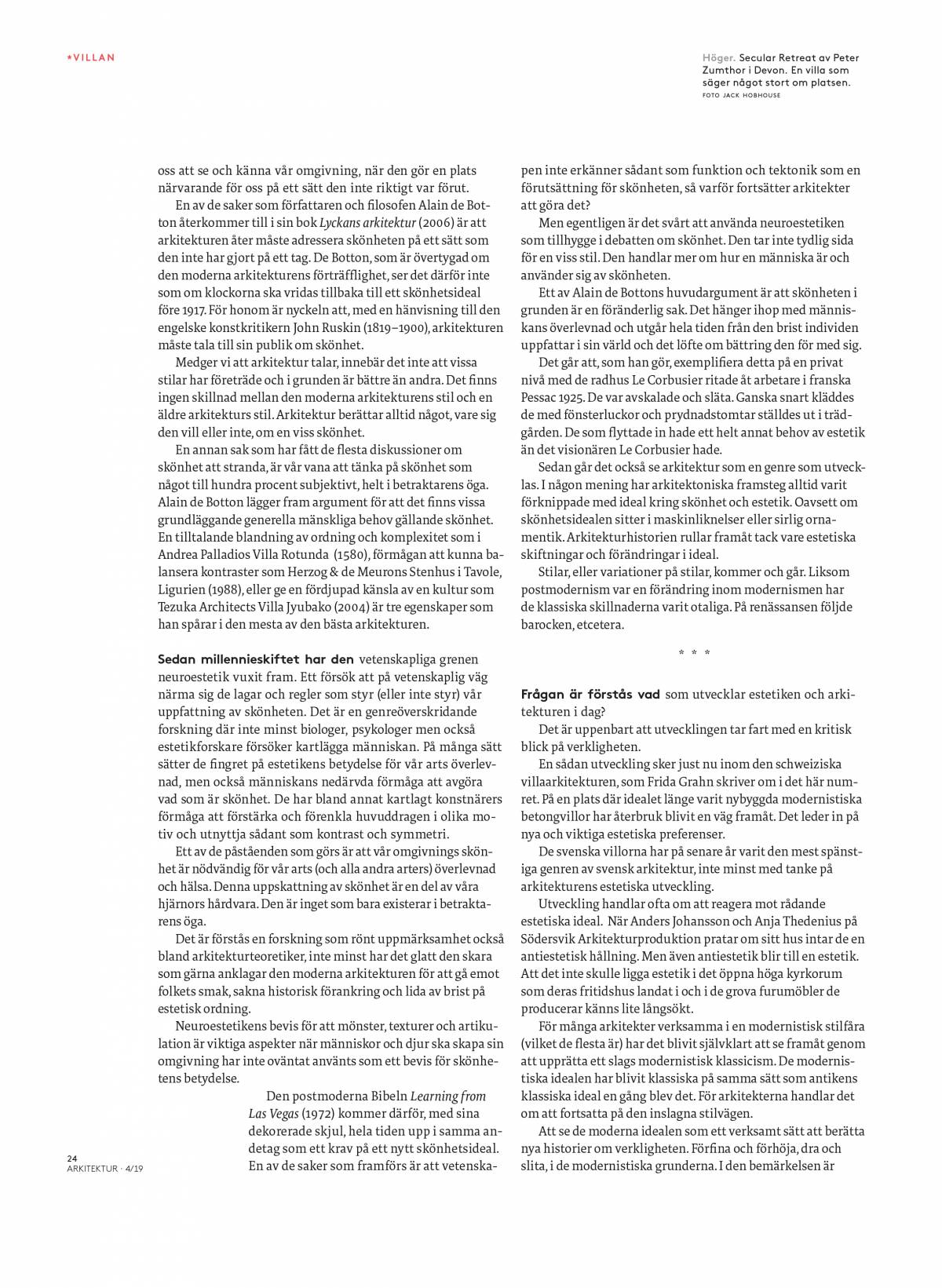 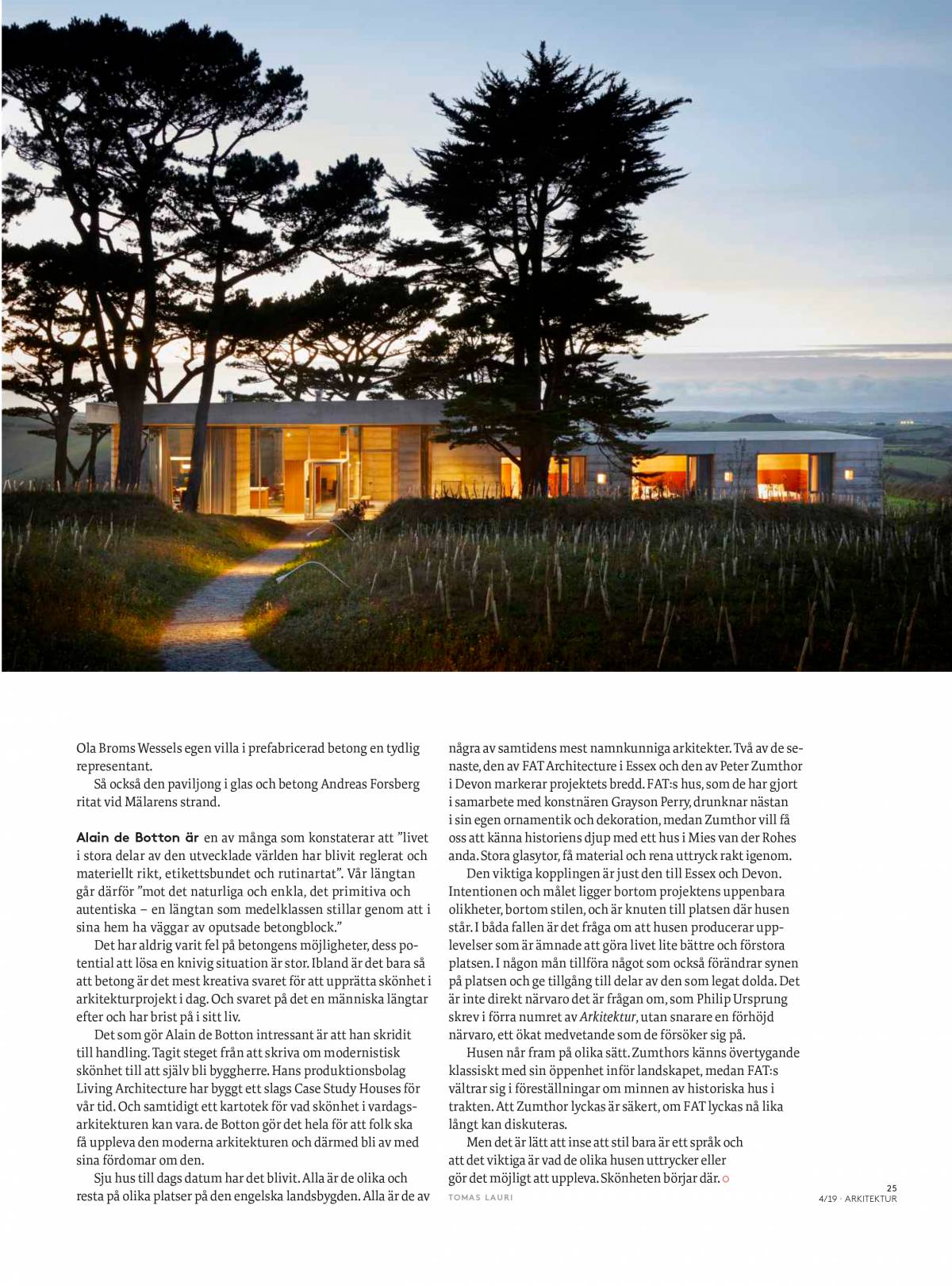