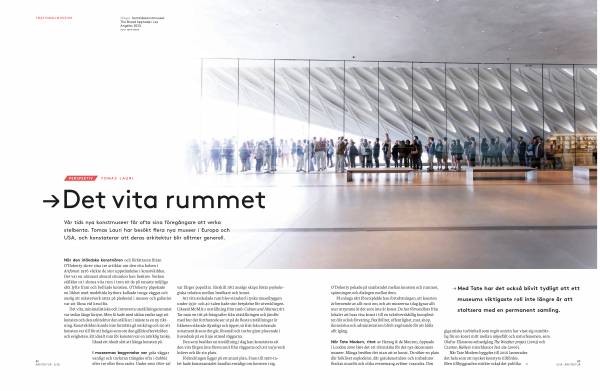 When the Irish artist and writer Brian O’Doherty wrote his three articles on the White Cube for Artforum in 1976, he caused quite a stir in the art world. It was an almost absurd situation he described. The works were exhibited in enclosed white rooms in the belief that this would highlight and liberate the artworks in the purest way possible. O’Doherty pointed out a resemblance to the heavy whitewashed walls of medieval churches and considered that masterpieces set on pedestals in museums and galleries were akin to crucifixes.

The white, minimalist and introverted exhibition space had long been the norm. However, few had said with such urgency that art, and the architecture in which it was exhibited, needed to move in a new direction. The art world could not simply go on believing that art was meant to be consecrated, something for posterity and all eternity. An ideal space for art was a strange idea, as was an ideal way to display that art.

During the genesis of museums, grey walls were commonplace, and paintings were often crammed into two, three or even more rows. In the late 19th century, colours became popular. Red in particular was considered to create the optimal psychological relationship between visitor and art.

The fact that stark, white rooms became standard in German museum buildings in the 1930s and 1940s was highly significant for this evolution. The 1936 MoMA exhibition Cubism and Abstract Art was equally important, and a comparison of photographs from this exhibition with most current-day exhibitions reveals a striking resemblance — spacious and open, as free from distracting ornamentation as possible, and with objects and paintings sparsely positioned primarily in a single row along the walls.

Anyone who visits an exhibition today can see that white-painted walls have far from vanished, and that each artwork demands and acquires its own place.

Change has taken place on a different plane, however. Until the 1970s, the art conversation had been one-sided, in favour of the art itself.

O’Doherty indicated the connection between art and space, the tension and dialogue between them. In many ways, he predicted the evolution: that art relies on everything around it, and that museums today devote increasing amounts of space to that which is not art. They have been transformed from premises solely to present art, to an incomprehensible complexity in which even storage, flexibility, publicity, food, shops, iconic status and administration become crucial to keep everything functioning.

When Tate Modern, designed by Herzog & de Meuron, opened in London in 2000, it became a benchmark for museums in the new decade. Many people visit without even seeing the art. They are looking for a place where street life is abuzz, where performers and buskers gather outside, and where all kinds of events are taking place at the same time. The gigantic turbine hall that serves as the entrance has proved indispensable for a kind of art somewhere between fairground attractions and natural phenomena, such as Olafur Eliasson’s sunset The Weather Project (2003) and Carsten Høller’s playground slides Test site (2006).

When Tate Modern was extended in 2016, it was advertised as a vast new area of art space being provided. However, the extension also augmented the public experience by offering a breathtaking view from the top floor and an amply sized VIP lounge for supporters of the organisation.

With Tate, it has also become clear that a museum’s most important role is no longer to boast a permanent collection. All museums, including the illustrious, historic ones, are now concerned with the value of remaining current. The focus has shifted to temporary exhibitions to entice audiences to visit the museum more often.

As a consequence, museums have followed the lead of art galleries in terms of use of space.

At the contemporary art museum Palais de Tokyo, designed by Lacaton & Vassal (2002), the differences between its often-innovative exhibitions and Paris’ most avant-garde galleries are slight. The same goes for MoMA PS 1 in New York, designed by Frederick Fisher & Partners (1997), later expanded by Andrew Berman Architects (2011).

Art should, as far as possible, appear rebellious and subversive, as though ahead of its time, and it should all but take over the space in which it is displayed. Art rooms must not, therefore, be overly controlled. Both institutions operate in older buildings. The architects have done their best to preserve the decadence of the original premises, the raw and unadulterated, and they have only slightly adjusted the exhibition rooms with the occasional new partition opening, extra exhibition wall or perhaps a little more white paint. A necessary layer of functionality has then been added: toilets, safety systems, shop and bar.

At the same time, many galleries have begun to adopt the language of museums. Newport Street Gallery in London is an initiative of artist Damien Hirst to exhibit his large private collection. The building, designed by Caruso St John (2015), is larger than a regular gallery and in practice functions as a museum. Art is deliberately curated. The halls are airy and white. There is a restaurant, café, shop, toilets and security lockers.

In addition to the fact that these three galleries and museums are spatially similar, their architecture, not least their interiors, share the characteristic of aiming to create the ideal atmosphere for art. An incorrect architectonic style might degrade the art. Just like a fashion store, conscious of being extremely deliberate in choosing an interior that enhances the brand, art institutions look to strengthen the identity of their rooms. It is not surprising, for example, that David Chipperfield’s fashionable style suits both Valentino and many museums around the world. In the commercial elements specifically, such as in the museum’s shop, it is clear that the aesthetic codes are identical.

One example where this desire to give art the right setting is Hauser & Wirth’s latest gallery in Los Angeles, which is located in an old flour factory converted by real estate developer Creative Space in collaboration with Selldorf Architects (2017). It is almost as though the art is there to create the right atmosphere in what is in effect a shopping mall. You don’t even have to see the art, but simply consume the reproductions and manifestations that follow in its tracks.

The art gallery itself is divided into several premises and blends in with the other shops in the complex. There are three different stores for art-related materials and lifestyle items, as well as books, gadgets and clothes. There is also a square to gather around and a pleasant restaurant in which to pass the time.

Everything is wrapped in the same industrial aesthetic. The concrete floor has, for the most part, simply been touched up and is still shows traces of an industrial era, while wooden beams are among the signs in the ceilings that expose the building’s origins. Only the white walls, of which very few are new, illustrate a semblance of change. Overall, this makes for a subdued art experience, as though the shops and the gallery were one and the same.

In the art institutions that emerged in the 2010s, it is also possible to see how the ability to successfully exhibit contemporary art is the primary concern of the architecture. Much is clearly focused on the evident demand for new engaging exhibitions. This means that curators, who increasingly emerge as creators in this context, attain a special status when it comes to the design of the rooms. Institutions develop like toolboxes for curators and must be able to respond to the needs of putting together many different types of exhibition.

Take the new Whitney Museum of American Art in New York, designed by Renzo Piano (2015). The flexibility there has achieved a spatial language with movable walls. The idea is that, as exhibitions change, rooms can be easily adapted to the next exhibition. In a way, this makes the museum a shell in which the interior offers a large range of possibilities.

The treatment of daylight is typical here. The halls are self-contained and only offer controlled indoor lighting. Views of the outside world are only available in the lobby, restaurant or café, as well as from the terraces and outdoor stairs that allow the museum’s visitors to move out into the city.

Just like Renzo Piano, architects Dillier Scofidio + Renfro have wrestled with whether or not to use daylight in The Broad in Los Angeles (2015). Much effort has been made in creating a shell that both gives the building a striking appearance as well as filtering light into some of the halls without unwelcome shadows and sunbeams. In the interior, the effect is one of artificial lighting. There is never a question of disturbing the art experience with views to the outside.

The Broad is a brand-new type of art institution, funded by financier Eli Broad, who made a fortune in, among other things, real estate deals. The business is based on his growing collection of around 2,000 works. Interestingly, the museum lacks its own restaurant, and its shop is unusually frugal. Everything is based on the potential of exhibitions to attract audiences.

The house is on three levels. An escalator cuts a cave-like tunnel diagonally up through the building all the way to the top floor. There one encounters a spectrum of contemporary art greats such as Jeff Koons and Jenny Saville in large, conventional rooms. The main collection is stored on the middle floor where they are displayed through windows from the staircase that takes the visitor down through the house. It is a little like looking into a warehouse and witnessing the activity going on, seeing that everything is ready to be picked from a shelf at any time. On the ground floor, where the rooms are fewer and more voluminous, the very latest pieces are exhibited, always with burning questions in focus, both aesthetically and politically, as though a themed biennial was constantly taking place.

Many of these newly built museums can be seen as criticisms of the institutions that were once built up in order to exhibit modern art. They are simply not adequate anymore. They come across as limited and somewhat inflexible under the weight of demand for constantly renewing exhibitions.

Typical in this context is the extension Snøhetta designed for the San Francisco Museum of Modern Art (2016). From the outside, it can be reminiscent of a parasite clinging to the original museum designed by Mario Botta (1995). Inside, however, the relationship is reversed. It is now Snøhetta’s halls that open up the museum forming its backbone. Although one enters the museum through Mario Botta’s building and entrance, it is Snøhetta’s extension that provides the communications and distribution between the floors through elevators or long beautiful stairways. It is also in Snøhetta’s section that the most up-to-date exhibitions are presented.

The extension has generated a better flow of movement throughout the museum and is in many ways a fitting presentation of the contemporary. Daylight reaches the stairwells, restaurant, café and lobby. The exhibition rooms themselves are self-contained and controlled, with flexibility arising from how the halls are interlaced and how their sizes vary. Especially interesting is how channels between the rooms are formed. In several places they are located at the intersection of four exhibition rooms, which creates great opportunities for the visitor to have a good overview and choose their own path through the exhibitions.

For this is indeed about exhibitions plural. Many, many exhibitions. With the extension, SFMoMA represents one of the largest museums of its kind. With this in mind, it is simply a case of filling up the halls with as much effective content as possible. As I walk through the museum, there five major exhibitions taking place at the same time, in addition to the more permanent exhibits. There are two exhibitions of photography, one about sound art and one that offers new perspectives on modern painting. It is hard to keep up with all of these exhibitions in a single visit.

Together with the old museum, the possibilities the extension offers are endless. 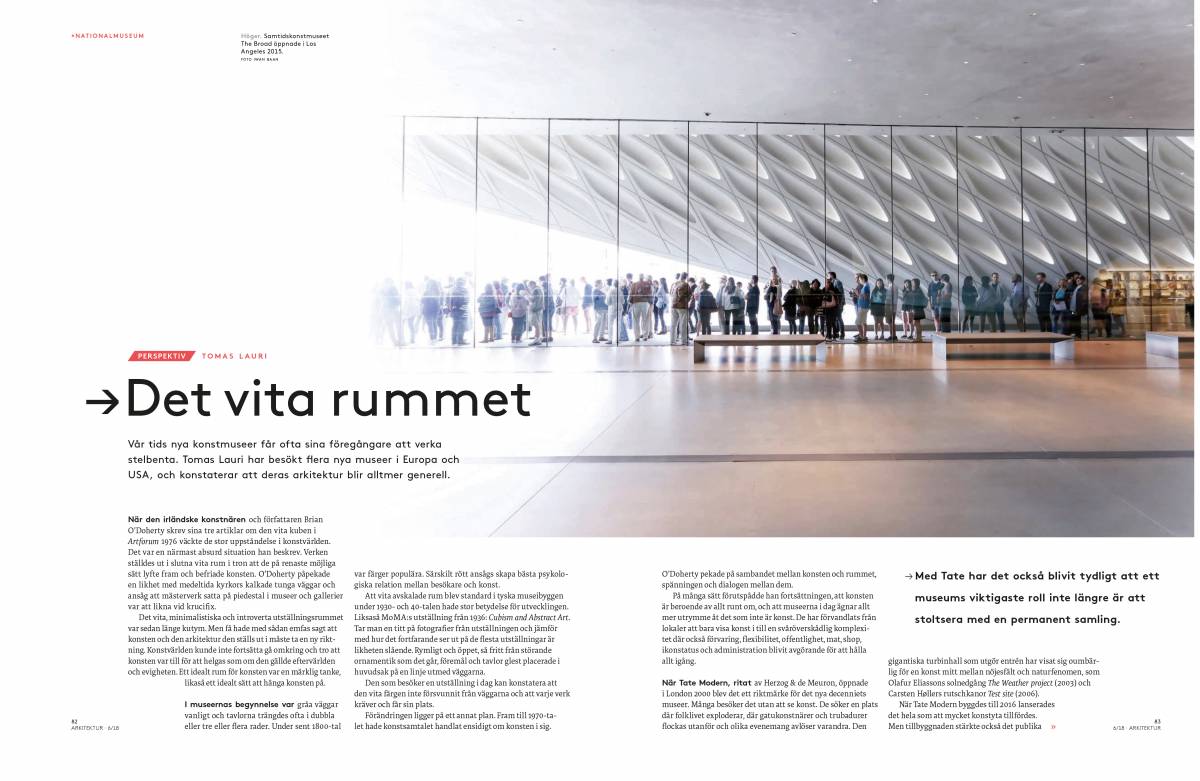 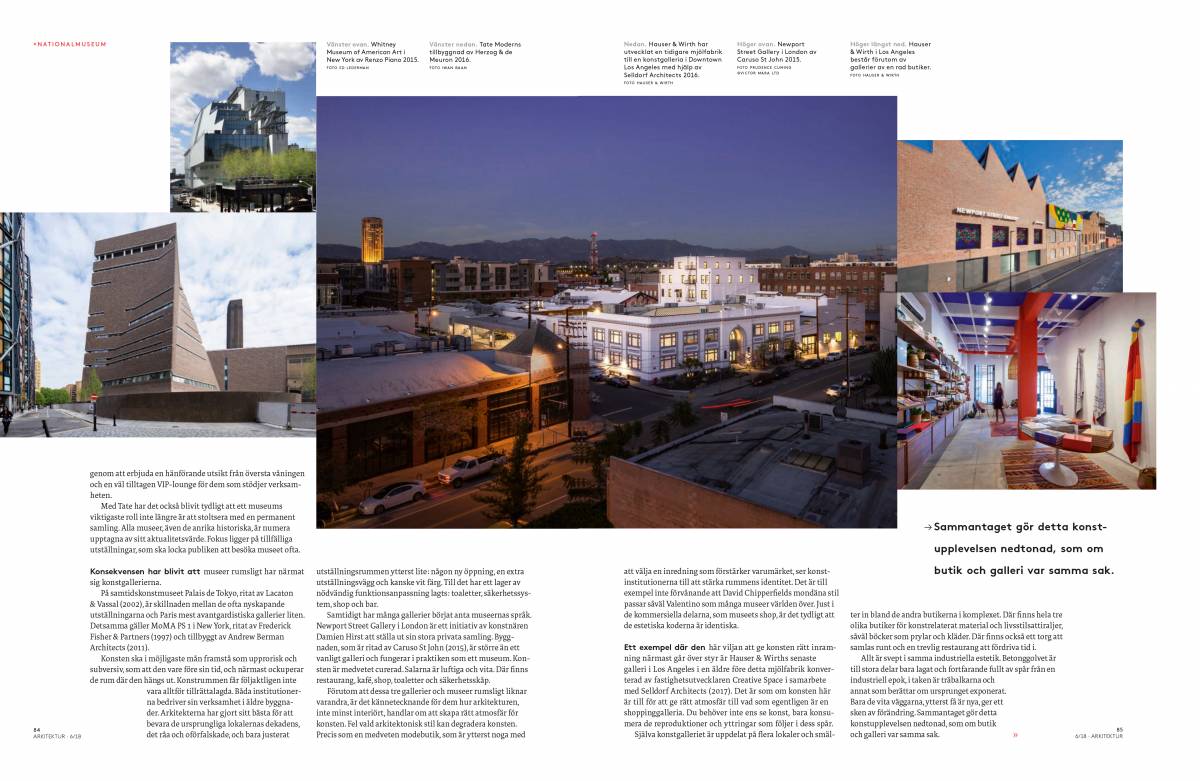 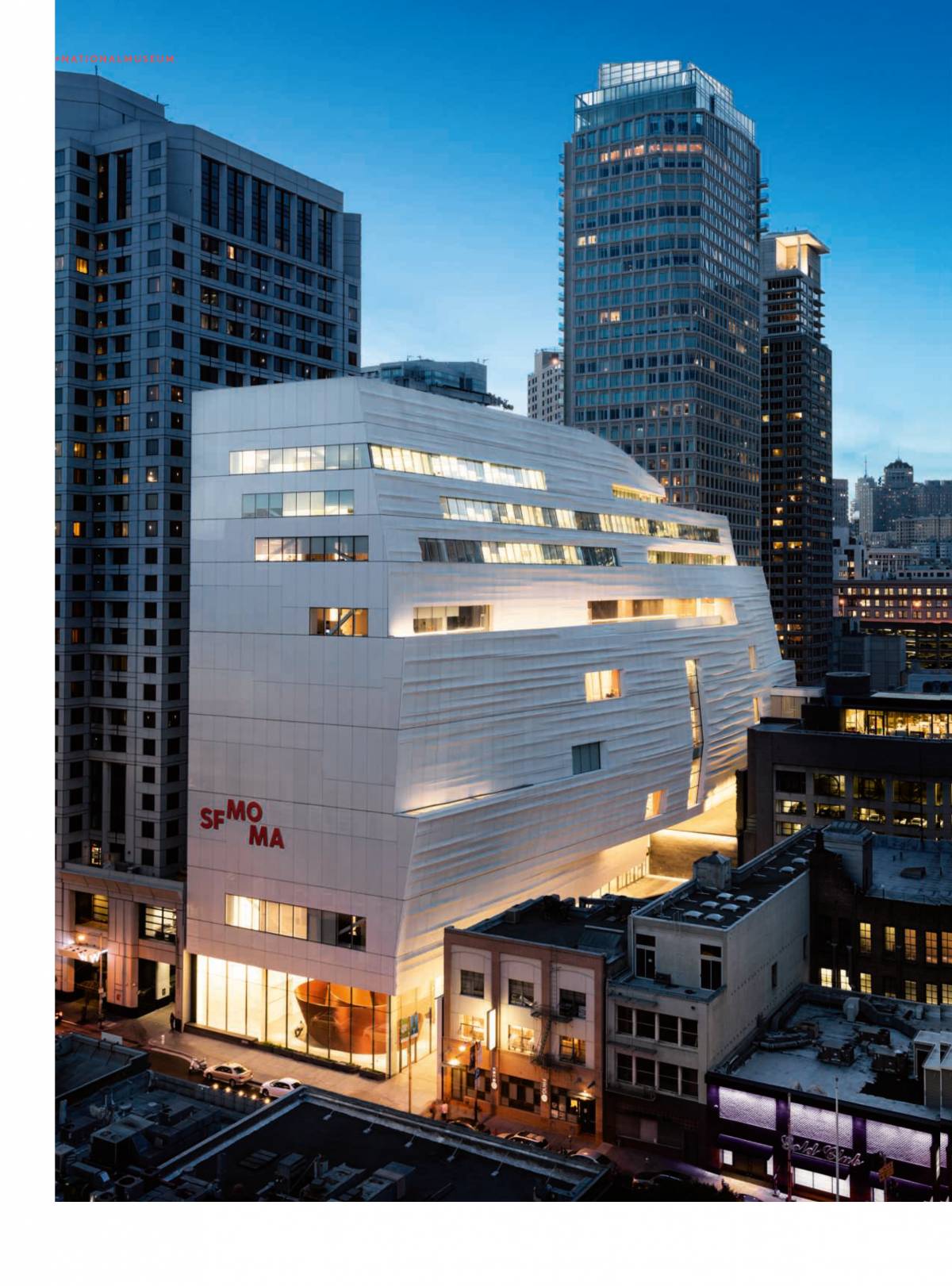 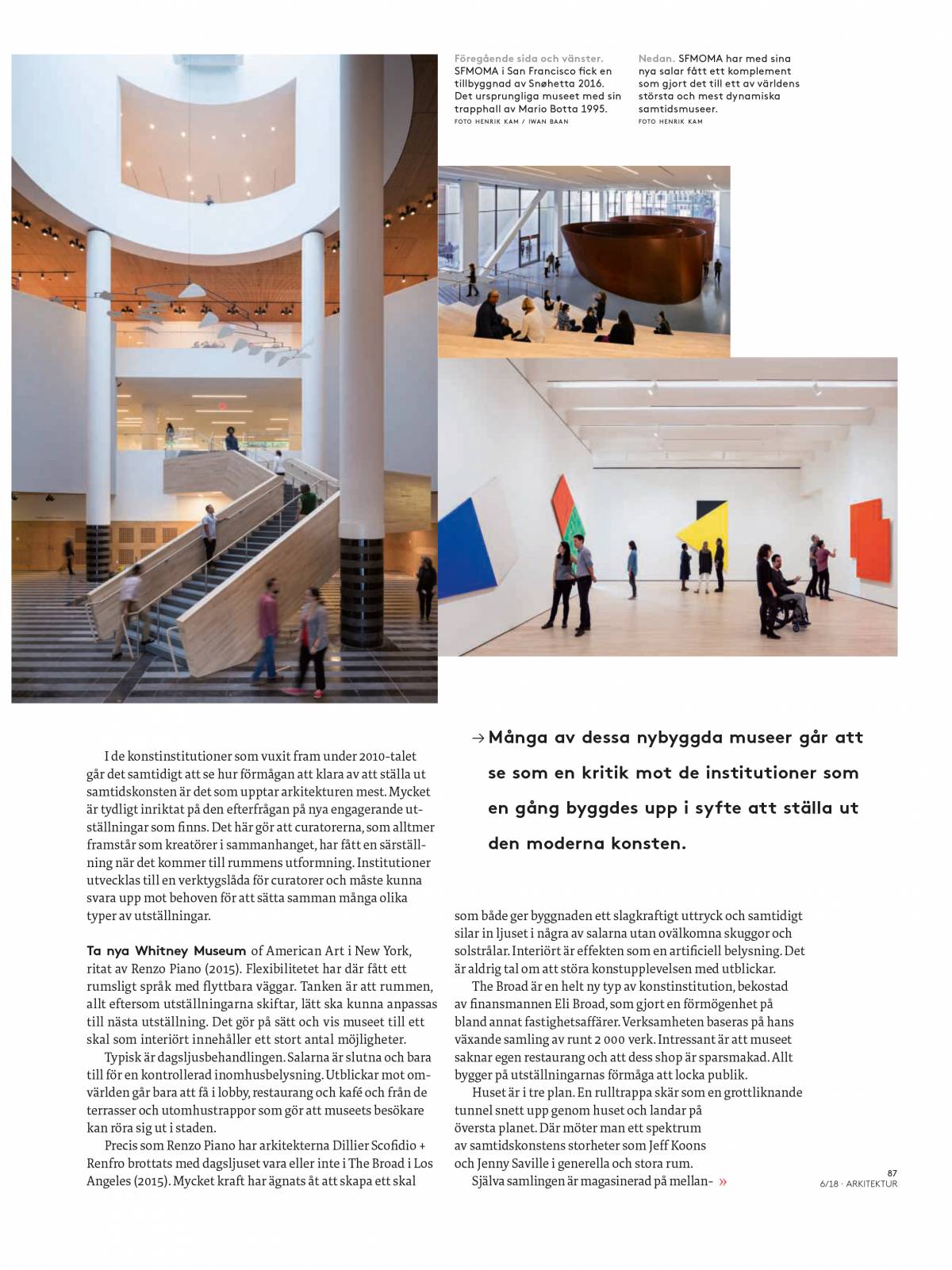 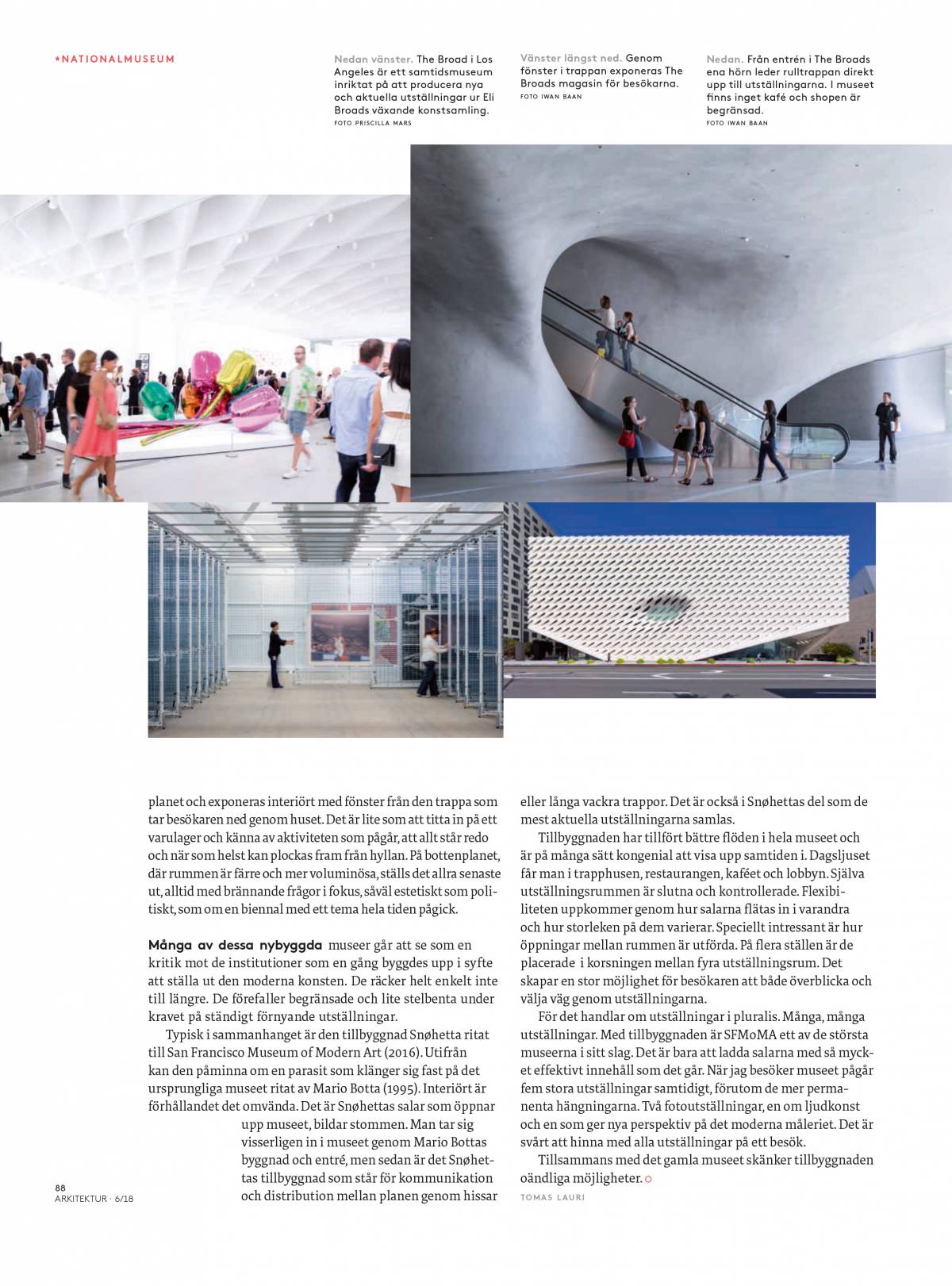